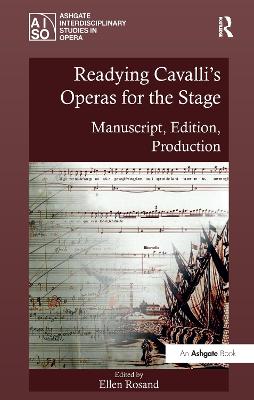 Readying Cavalli's Operas for the Stage

Description - Readying Cavalli's Operas for the Stage by Ellen Rosand

After more than three centuries of silence, the voice of Francesco Cavalli is being heard loud and clear on the operatic stages of the world. The coincidence of productions at La Scala (Milan) and Covent Garden (London) in the same month (September 2008) of two different operas signals a new stage in the recovery of these extraordinary works, confined until now to special venues committed to 'early music'-opera festivals, conservatory, and university productions. The works of the composer who is credited with having invented the genre of opera as we know it are finally enjoying a renaissance. A new edition of Cavalli's twenty-eight operas is in preparation, and the composer and his works are at the center of a great deal of new scholarship ranging from the study of sources and production issues to the cultural context of opera of this period.

In the face of such burgeoning interest, this collection of essays considers the Cavalli revival from various points of view. In particular, it explores the multiple issues involved in the transformation of an operatic manuscript into a performance. Although focused on the works of Cavalli, much of this material can transfer easily to other operatic repertoires.

Following an introductory part, reflecting back on four decades of Cavalli performances by some of the conductors responsible for the revival of interest in the composer, the collection is divided into four further parts: The Manuscript Scores, Giasone: Production and Interpretation, Making Librettos, and Cavalli Beyond Venice.

A Preview for this title is currently not available.
More Books By Ellen Rosand
View All