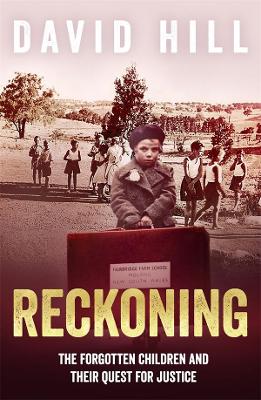 Reckoning: The forgotten children and their quest for justice

Description - Reckoning: The forgotten children and their quest for justice by David Hill

The story of how David Hill and the other Forgotten Children took on the institutions that tried to break them - and won.

The Forgotten Children was David Hill's heartbreaking account of the abuse that he and other 'orphans of empire' survived at the Fairbridge Farm School in New South Wales. Part memoir, part oral history, the book became a bestseller. It was also the catalyst in a subsequent battle for justice, which resulted in the Fairbridge kids being awarded a record $24 million in compensation by the NSW Supreme Court. And that was just the start of a reckoning with institutional abuse of power that reverberates to this day.

In Reckoning David recounts stories of the shocking systemic abuse at Fairbridge, and how he led the fight against the powerful people and organisations - including the Australian and British governments and the Royal Family -- who denied and covered up terrible crimes perpetrated on innocent children, some as young as five years old. David's fight for acknowledgement and restitution was for himself but especially for those kids, who as adults showed remarkable, enduring resilience and determination in holding to account the establishments responsible for their suffering.

Reckoning is both a tribute to the children who were betrayed by broken system and a compelling account of an extraordinary quest for justice. It is the story of how David Hill and the other Forgotten Children took on the institutions that tried to break them - and won.

Buy Reckoning: The forgotten children and their quest for justice by David Hill from Australia's Online Independent Bookstore, BooksDirect.

A Preview for this title is currently not available.
More Books By David Hill
View All

Convict Colony: The remarkable story of the fledgling settlement that survived against the odds
David Hill
Paperback , Oct '19
20% OFF!
RRP: $32.99 $26.39