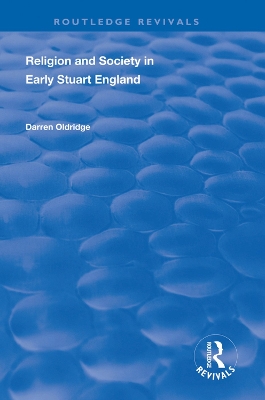 First published in 1998, this book presents an overview of some recent debates on the history of religion in England from the accession of James I to the outbreak of the Civil War. Darren Oldridge rejects the polarisation of discussion on the meaning and impact of Laudianism's innovations and the effects of the zealous Puritans. Instead, the author draws them together to emphasise how each directly influenced the other within a wider heightening of religious tension. Two of its central themes are the impact of the ecclesiastical policies of Charles I and the relationship between puritanism and popular culture. These themes are developed in eight related essays, which emphasize the connections between church policy, puritanism and popular religion. The book draws on much original research from the Midlands, as well as recent work by other scholars in the field, to set out a new synthesis which attempts to explain the emergence of religious conflict in the decades before the English Civil War. A Preview for this title is currently not available.
More Books By Darren Oldridge
View All