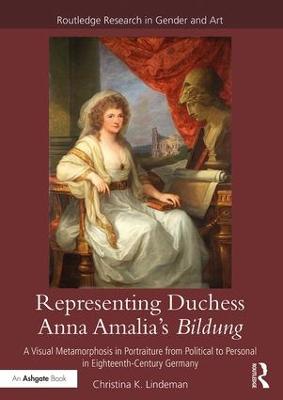 The cultural milieu in the "Age of Goethe" of eighteenth-century Germany is given fresh context in this art historical study of the noted writers' patroness: Anna Amalia, Duchess of Weimar-Sachsen-Eisenach. An important noblewoman and patron of the arts, Anna Amalia transformed her court into one of the most intellectually and culturally brilliant in Europe; this book reveals the full scope of her impact on the history of art of this time and place. More than just biography or a patronage study, this book closely examines the art produced by German-speaking artists and the figure of Anna Amalia herself. Her portraits demonstrate the importance of social networks that enabled her to construct scholarly, intellectual identities not only for herself, but for the region she represented. By investigating ways in which the duchess navigated within male-dominated institutions as a means of advancing her own self-cultivation - or Bildung - this book demonstrates the role accorded to women in the public sphere, cultural politics, and historical memory. Cumulatively, Christina K. Lindeman traces how Anna Amalia, a woman from a small German principality, was represented as an active participant in enlightened discourses. The author presents a novel and original argument concerned with how a powerful woman used art to shape her identity, how that identity changed over time, and how people around her shaped it - an approach that elucidates the power of portraiture in eighteenth- and early nineteenth-century Europe.