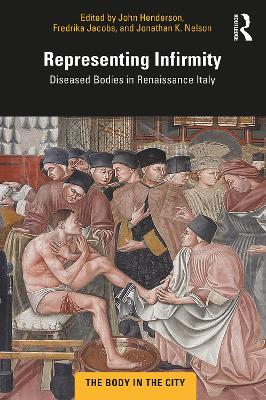 This volume is the first in-depth analysis of how infirm bodies were represented in Italy from c. 1400 to 1650. Through original contributions and methodologies, it addresses the fundamental yet undiscussed relationship between images and representations in medical, religious, and literary texts.

Looking beyond the modern category of 'disease' and viewing infirmity in Galenic humoral terms, each chapter explores which infirmities were depicted in visual culture, in what context, why, and when. By exploring the works of artists such as Caravaggio, Leonardo, and Michelangelo, this study considers the idealized body altered by diseases, including leprosy, plague, goitre, and cancer. In doing so, the relationship between medical treatment and the depiction of infirmities through miracle cures is also revealed. The broad chronological approach demonstrates how and why such representations change, both over time and across different forms of media. Collectively, the chapters explain how the development of knowledge of the workings and structure of the body was reflected in changed ideas and representations of the metaphorical, allegorical, and symbolic meanings of infirmity and disease.

The interdisciplinary approach makes this study the perfect resource for both students and specialists of the history of art, medicine and religion, and social and intellectual history across Renaissance Europe. A Preview for this title is currently not available.
More Books By John Henderson
View All

Vergil's Aeneid, Book III Edited with Introductory Notices, Notes, and Complete Vocabulary, for the Use of Classes Reading for Junior Leaving and for University Matriculation / By John Henderson and E.W. Hagarty
John Henderson
Hardback , Nov '18
RRP: $86.69 $78.02

Caesar's Bellum Gallicum, (Books III. & IV.): With Introductory Notices, Notes, Complete Vocabulary and a Series of Exercises for Re-Translation, for the Use of Classes Reading for Departmental and University Examinations: 3-4
John Henderson
Hardback , Nov '18
RRP: $86.69 $78.02