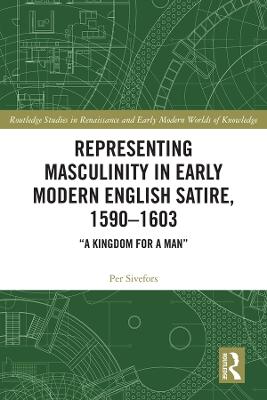 Representing Masculinity in Early Modern English Satire, 1590-1603: "A Kingdom for a Man"

Description - Representing Masculinity in Early Modern English Satire, 1590-1603: "A Kingdom for a Man" by Per Sivefors

Engaging with Elizabethan understandings of masculinity, this book examines representations of manhood during the short-lived vogue for verse satire in the 1590s, by poets like John Donne, John Marston, Everard Guilpin and Joseph Hall. While criticism has often used categorical adjectives like "angry" and "Juvenalian" to describe these satires, this book argues that they engage with early modern ideas of manhood in a conflicted and contradictory way that is frequently at odds with patriarchal norms even when they seem to defend them. The book examines the satires from a series of contexts of masculinity such as husbandry and early modern understandings of age, self-control and violence, and suggests that the images of manhood represented in the satires often exist in tension with early modern standards of manhood. Beyond the specific case studies, while satire has often been assumed to be a "male" genre or mode, this is the first study to engage more in depth with the question of how satire is invested with ideas and practices of masculinity.

Buy Representing Masculinity in Early Modern English Satire, 1590-1603: "A Kingdom for a Man" by Per Sivefors from Australia's Online Independent Bookstore, BooksDirect.