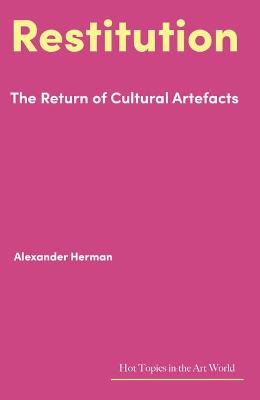 Restitution: The Return of Cultural Artefacts

Description - Restitution: The Return of Cultural Artefacts by Alexander Herman

Debates about the restitution of cultural objects have been ongoing for many decades, but have acquired a new urgency recently with the intensification of scrutiny of European museum collections acquired in the colonial period. Alexander Herman's fascinating and accessible book provides an up-to-date overview of the restitution debate with reference to a wide range of current controversies.

This is a book about the return of cultural treasures: why it is demanded, how it is negotiated and where it might lead. The uneven relationships of the past have meant that some of the greatest treasures of the world currently reside in places far removed from where they were initially created and used. Today we are witnessing the ardent attempts to put right those past wrongs: a light has begun to shine on the items looted from Asia, Africa, the Middle East, the Americas and the Pacific, and the scales of history, according to some, are in need of significant realignment.

This debate forces us to confront an often dark history, and the difficult application of our contemporary conceptions of justice to instances from the past. Should we allow plundered artefacts to rest where they lie - often residing there by the imbalances of history? This book asks whether we are entering a new 'restitution paradigm', one that could have an indelible impact on the cultural sector - and the rest of the world - for many years to come. It provides essential reading for all those working in the art and museum worlds and beyond.

A Preview for this title is currently not available.
More Books By Alexander Herman
View All