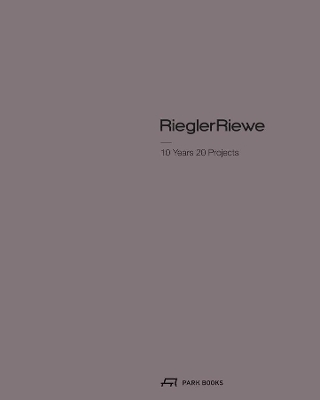 Riegler Riewe Architects is among the most distinguished and internationally renowned Austrian architectural firms with branches in Berlin and Katowice, Poland. Since establishing the firm in Graz in 1987, Florian Riegler and Roger Riewe have been rejecting the mere pictorial with striking continuity and consistency. Riegler Riewe focus on use-orientated, yet still usage-neutral spatial structures and aim for an inquiring, "undesigned", yet precise and subtle architecture. This position is evident in their buildings that embody both the "common" and the ambiguous and offer latitude rather than rigid form at all scales, in floor plan as well as in urban planning. The new monograph Riegler Riewe - 10 Years 20 Projects presents twenty built and unrealised projects between 2004 and 2014, most of them published here for the first time. Richly illustrated with images and plans, the book features essays by internationally renowned authors analysing Riegler Riewe's work in the contexts of both architecture and urbanism. AUTHOR: Eva Guttman is an Austrian architectural writer and publicist. She has been director of HDA - Haus der Architektur in Graz 2010-13 and chief editor of the architectural journal Zuschnitt 2004-09. 100 colour, 100 b/w illustrations