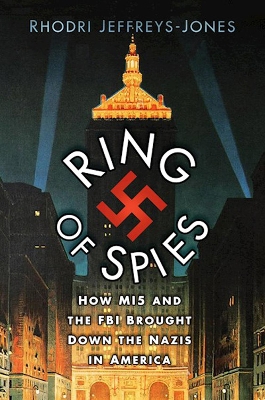 Ring of Spies: How MI5 and the FBI Brought Down the Nazis in America

Description - Ring of Spies: How MI5 and the FBI Brought Down the Nazis in America by Rhodri Jeffreys-Jones

Speedy cars and faster women, British secret agents and Nazi spies, stolen American blueprints hidden in violin cases and specially adapted umbrellas. This is the story of the Nazi spy ring that operated in America in the 1930s. Receiving orders via a hairdressing salon in an unfashionable quarter of Dundee, the ring's eccentric cast included Scotland's Jessie Jordan and Germany's Jenni Hofmann, who were beauticians who spied; the Long Island musician Willy Lonkowski, who was otherwise known as Agent Sex; Ignatz Griebl, a German-American anti-Semite; Kate Moog, one of President Roosevelt's former nurses, who became the madame of a honey-trap brothel in Washington; and Bremen-based masterspy Eric Pfeiffer, who organised the theft of American military secrets. But on the eve of the Second World War, following a tip-off from MI5, who had been tracking Jessie Jordan in Scotland, the FBI were finally able to bring the group to justice. In Ring of Spies, Rhodri Jeffreys-Jones reveals how this case helped to awaken America to the Nazi menace, and how it skewed American opinion to favour Britain and France, thus spelling the end of US neutrality. AUTHOR: Rhodri Jeffreys-Jones is the acclaimed author of We Know All About You: The Story of Surveillance in Britain and America (OUP, 2017) and In Spies We Trust: The Story of Western Intelligence (OUP, 2013). He has a special interest in intelligence and detective history, and has written histories of the FBI and of British-American intelligence cooperation. 20 b/w illustrations

Buy Ring of Spies: How MI5 and the FBI Brought Down the Nazis in America by Rhodri Jeffreys-Jones from Australia's Online Independent Bookstore, BooksDirect.