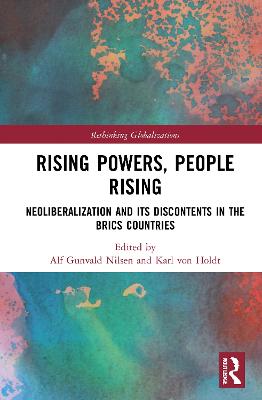 Rising Powers, People Rising: Neoliberalization and its Discontents in the BRICS Countries

Rising Powers, People Rising is a pathbreaking volume in which leading international scholars discuss the emerging political economy of development in the BRICS countries centred on neo-liberalization, precarity, and popular struggles.

The rise of the BRICS countries - Brazil, Russia, India, China, and South Africa - has called into question the future of Western dominance in world markets and geopolitics. However, the developmental trajectories of the BRICS countries are shot through with socio-economic fault lines that relegate large numbers of people to the margins of current growth processes, where life is characterized by multiple and overlapping vulnerabilities. These socio-economic fault lines have, in turn, given rise to political convulsions across the BRICS countries, ranging from single-issue protests to sustained social movements oriented towards structural transformation. The contributions in this book focus on the ways in and extent to which these trajectories generate distinct forms and patterns of mobilization and resistance, and conversely, how popular struggles impact on and shape these trajectories. The book unearths the economic, social, and political contradictions that tend to disappear from view in mainstream narratives of the BRICS countries as rising powers in the world-system.

The chapters in this book were originally published as a special issue of Globalizations.

A Preview for this title is currently not available.
More Books By Alf Gunvald Nilsen
View All