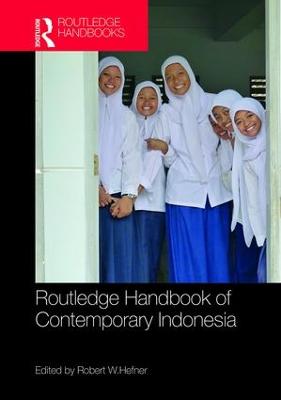 Few countries as culturally rich, politically pivotal, and naturally beautiful as Indonesia are as often misrepresented in global media and conversation. Stretching 3,400 miles east to west along the equator, Indonesia is the fourth most populous country in the world and home to more than four hundred ethnic groups and several major world religions. This sprawling Southeast Asian nation is also the world's most populous Muslim-majority country and the third largest democracy. Although in recent years the country has experienced serious challenges with regard to religious harmony, its trillion-dollar economy is booming and its press and public sphere are among the most vibrant in Asia. A land of cultural contrasts, contests, and contradictions, this ever-evolving country is today rising to even greater global prominence, even as it redefines the terms of its national, religious, and civic identity.

The Routledge Handbook of Contemporary Indonesia offers an overview of the modern making and contemporary dynamics of culture, society, and politics in this powerful Asian nation. It provides a comprehensive survey of key issues in Indonesian politics, economics, religion, and society. It is divided into six sections, organized as follows:

Bringing together original contributions by leading scholars of Indonesia in law, political science, history, anthropology, sociology, religious studies, and gender studies this Handbook provides an up-to-date, interdisciplinary, and academically rigorous exploration of Indonesia. It will be of interest to students, academics, policymakers, and others in search of reliable information on Indonesian politics, economics, religion, and society in an accessible format.

A Preview for this title is currently not available.
More Books By Robert W. Hefner
View All