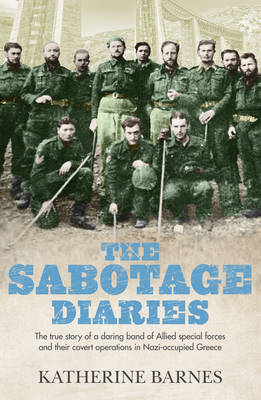 Based on the wartime diaries of Allied soldier and saboteur Tom Barnes, this account of thrilling WWII wartime deeds deep behind enemy lines in Greece is based on fact but reads like fiction.

A thrilling read of wartime exploits, daring, intrigue and resourcefulness, The Sabotage Diaries is the astonishing true story of Allied engineer Tom Barnes, who was parachuted behind enemy lines in Greece in October 1942 with a small team of sappers and special operations officers. Their brief was to work with the Greek resistance in sabotage operations against the German and Italian occupation forces. Under-equipped and under-prepared but with courage to spare, their initial mission was to blow up a key railway bridge, cutting Rommel's supply lines to North Africa, where the battle of El Alamein was about to begin. But Operation Harling-as it was known-was only the start of a lengthy and perilous clandestine mission.

Written by Tom Barnes' daughter-in-law, award-winning author Katherine Barnes, and drawn from Tom's wartime diaries, reports and letters, plus many other historical sources and first-hand accounts, this is a vivid and gripping tale of the often desperate and dangerous reality behind sabotage operations.

'A thrilling tale that could be straight out of the pages of an action adventure novel ... a remarkable and highly readable tale of a little known World War II operation.' Daily Telegraph

'Think the Guns of Navarone, but for real ... Explosions, mountains, dashing male partisans, dashing female partisans, big fat village weddings, treachery - it's all here in this thrilling and informative salute to an unsung hero of the Second World War.' Sunday Express UK

'The Sabotage Diaries has fantastically broad appeal ... Like a saboteur under the cover of dark, the book will stealthily administer a solid history lesson cloaked in an enthralling personal tale of struggle, success and longing.' Neos Kosmos