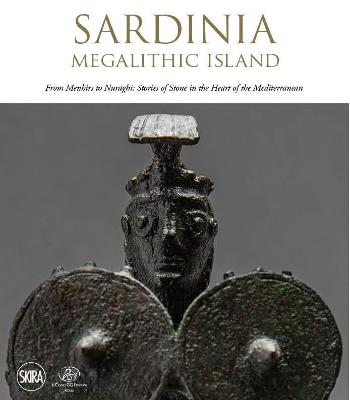 Sardinia: Megalithic Island: From Menhirs to Nuraghi: Stories of Stone in the Heart of the Mediterranean

Description - Sardinia: Megalithic Island: From Menhirs to Nuraghi: Stories of Stone in the Heart of the Mediterranean by Tina Oldknow

This is the catalogue of an itinerant exhibition that will visit several cities in Europe, exploring and revealing the secrets of one of the most fascinating civilizations of the Mediterranean Sea. The Nuragic civilization takes its name from the Sardinian word for the monument considered most representative of this civilization: the "nuraghe".

This consists of a tower construction built with large slabs of stone (rough-hewn or cut with varying degrees of regularity), which contained one or more chambers, one on top of the other, featuring the typical roof known as a "false dome" or "tholos". It appears both in the form of a single tower and as a complex, with a central tower surrounded by other towers. Villages of stone huts were built around many of the nuraghi.

There are also other types of building: the "protonuraghi" (also known as "pseudonuraghi" or "corridor nuraghi"), the "giants' tombs", the "well temples" and "sacred springs", and the "megaron" temples.

The archaeological data confirm that the Nuragic civilization was based on an agricultural and sheep-farming economy, but it also made significant use of mineral resources (particularly copper and lead).

Buy Sardinia: Megalithic Island: From Menhirs to Nuraghi: Stories of Stone in the Heart of the Mediterranean by Tina Oldknow from Australia's Online Independent Bookstore, BooksDirect.

A Preview for this title is currently not available.
More Books By Tina Oldknow
View All