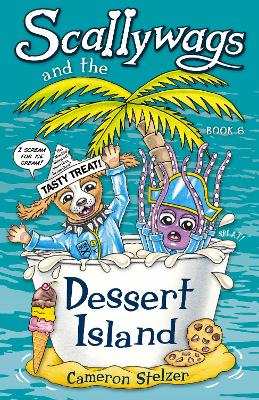 Mischief McScruff is running late for class - again! His excuse is an embarrassing story about a pair of shorts and a tin of pink paint. When Headmaster von Ironheart refuses to believe a word of his explanation, Mischief is given one last chance to redeem himself. The scruffy Sea Dog must arrive on time for the circus excursion or face expulsion from the School of Scallywags. But the trip to the circus is anything but smooth sailing. After fleeing from an exploding boat and narrowly escaping the Surfin' Sharks, Mischief and his classmates are marooned on a not-so-deserted island. Dessert Island, as its name suggests, is home to a Mice Cream, an eccentric Choc Chip Monk and a colourful Uni Cone. But as Mischief soon discovers, the islanders have big troubles of their own.
In the Scallywags sixth zany adventure Mischief must face his sugary fears and find the perfect choc chip cookie dough ice cream before his time runs out.