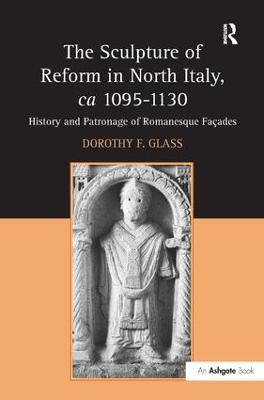 History and Patronage of Romanesque Facades

Entirely original in its methodology, this study offers a fresh approach to the study of Romanesque facade sculpture. Declining to revisit questions of artistic personalities, artistic style and connoisseurship, Dorothy F. Glass delves instead into the historical and historiographical context for a group of significant monuments erected in Italy between the last decade of the eleventh century and the first third of the twelfth century. In her reading, local culture takes precedence over names, context over connoisseurship; she argues that it was the cultural, intellectual and religious life of the abbeys of San Benedetto Po and Nonantola that provided the framework for the Reformist ethos of much of the sculpture adorning the cathedral of Modena. Glass argues that the monuments are deeply rooted in the concerns of the reform of the church, more commonly known as the Gregorian Reform, that these reform ideas and ideals were first fomented in monastic communities and then adopted by the new cathedrals built in cities that, freed of submission to imperial German rule, had recently rejoined the papal fold. The Sculpture of Reform in North Italy, ca 1095-1130: History and Patronage of Romanesque Facades moves scholarship beyond continuously reiterated opinions concerning style, attribution, chronology, origins and influence, instead opening new and fruitful lines of inquiry into the patronage and historical significance of these extraordinary monuments.