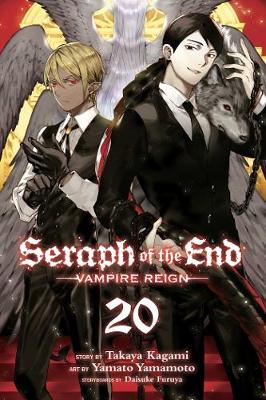 In a post-apocalyptic world of vampires vs. humans, Yuichiro brings vengeance upon his vampire overlords!

After trumpets of the apocalypse proclaim the fall of humanity, vampires arise from the shadows to rule the earth. Yuichiro wants just one thing-to get revenge by killing each and every vampire.

The Hyakuya Sect descends on the Demon Army as the First Progenitor, Sika Madu, takes over Shinoa's mind and body. Leading the invasion is none other than Second Progenitor Rigr Stafford-he's after Yuichiro, who is once again on the run with Mika. Meanwhile, Guren and Mahiru enact their long-awaited plan. It's an all-out war between vampires, humans and demons!