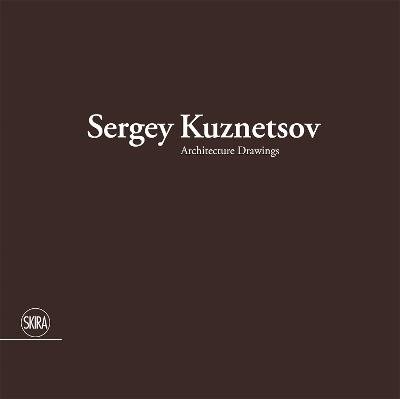 This volume devoted to Kuznetsov's architectural drawings makes a valuable contribution to understanding the work and vision of one of the most interesting protagonists of the new generation of architects from present-day Russia. The practice of drawing is seen to be crucial to the way of thinking about architecture and of observing the contemporary city. It is also a source of inspiration and research, through drawing from life views and images of the many places visited in recent years, which become material for reflection and offer suggestions for metropolitan scenarios of the near future. Sergey Kuznetsov was born in 1977 inMoscow. In 2001 he graduated from theMoscow Architectural Institute. In the final course of study, he already founded his first architectural studio that was in close collaboration with a German studio nps tchoban voss, headed by Russian-German architect Sergei Tchoban. In 2006 Sergey Kuznetsov and Sergei Tchoban founded the office SPEECH Tchoban & Kuznetsov. It quickly became successful in Russia and currently has 250 employees. SPEECH Tchoban & Kuznetsov has authored such projects as Office Building on Leninsky prospekt (Moscow), Residential complex Granatny 6 (Moscow), Grunewald Residential complex (Moscow), Office and Business multifunctional complex on Ozerkovskaya embankment (Moscow), Palace ofWater Sports (Kazan),Museum for Architectural Drawing in Berlin, Hotel Kempinski Plaza inMinsk, Republic of Belarus. Kuznetsov has taken part in various architecture exhibitions, including international ones. In 2010 and 2012 he was the co-curator of the Russian pavilion at the Venice Architecture Biennale, which for the first time was awarded with an "HonourableMention" prize by the jury in 2012. Since 2008 Kuznetsov is also an editor for speech: architectural magazine. In 2012 Kuznetsov was assigned to the post of the Chief Architect ofMoscow and he left his partnership at SPEECH. Today Kuznetsov is eager to actively increase the quality of architecture inMoscow. He applies a competitive practice with foreign experts, changes the quality of standard social objects and public spaces and indulges in educational and publishing projects.

A Preview for this title is currently not available.
More Books By Luca Molinari
View All