Description - Seven Devils by Elizabeth May

THE INSTANT SUNDAY TIMES TOP FIVE BESTSELLERWaterstone's Best Books of 2020 pick'Moves at a cracking pace and, with neat plot twists and cliffhangers, is page-turning fun' Guardian'A witty, fast-paced feminist space opera' BooklistSeven resistance fighters will free the galaxy from the ruthless Empire - or die trying.When Eris faked her death, she thought she had left her old life as the heir to the galaxy's most ruthless empire behind. But her recruitment by the Novantaen Resistance, an organization opposed to the empire's voracious expansion, throws her right back into the fray.Eris has been assigned a new mission: to infiltrate a spaceship ferrying deadly cargo and return the intelligence gathered to the Resistance. But her partner for the mission, mechanic and hotshot pilot Cloelia, bears an old grudge against Eris, making an already difficult infiltration even more complicated.When they find the ship, they discover more than they bargained for: three fugitives with firsthand knowledge of the corrupt empire's inner workings.Together, these women possess the knowledge and capabilities to bring the empire to its knees. But the clock is ticking: the new heir to the empire plans to disrupt a peace summit with the only remaining alien empire, ensuring the empire's continued expansion. If they can find a way to stop him, they will save the galaxy. If they can't, millions may die.'Revels in the frenetic energy of its girl-power infused, space operatic premise' Publishers Weekly'More gripping than The Expanse' Charles Stross

Other Editions - Seven Devils by Elizabeth May 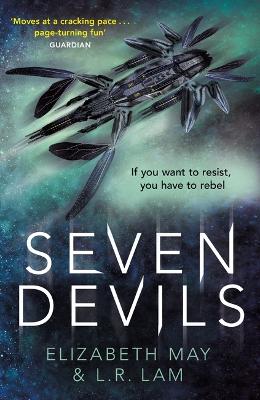