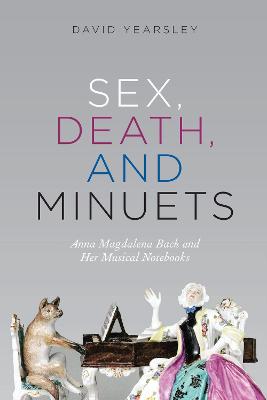 At one time a star in her own right as a singer, Anna Magdalena (1701-60) would go on to become, through her marriage to the older Johann Sebastian Bach, history's most famous musical wife and mother. The two musical notebooks belonging to her continue to live on, beloved by millions of pianists young and old. Yet the pedagogical utility of this music-long associated with the sound of children practicing and mothers listening-has encouraged a rosy and one-sided view of Anna Magdalena as a model of German feminine domesticity.
Sex, Death, and Minuets offers the first in-depth study of these notebooks and their owner, reanimating Anna Magdalena as a multifaceted historical subject-at once pious and bawdy, spirited and tragic. In these pages, we follow Magdalena from young and flamboyant performer to bereft and impoverished widow-and visit along the way the coffee house, the raucous wedding feast, and the family home. David Yearsley explores the notebooks' more idiosyncratic entries-like its charming ditties on illicit love and searching ruminations on mortality-against the backdrop of the social practices and concerns that women shared in eighteenth-century Lutheran Germany, from status in marriage and widowhood, to fulfilling professional and domestic roles, money, fashion, intimacy and sex, and the ever-present sickness and death of children and spouses. What emerges is a humane portrait of a musician who embraced the sensuality of song and the uplift of the keyboard, a sometimes ribald wife and oft-bereaved mother who used her cherished musical notebooks for piety and play, humor and devotion-for living and for dying.

A Preview for this title is currently not available.
More Books By David Yearsley
View All