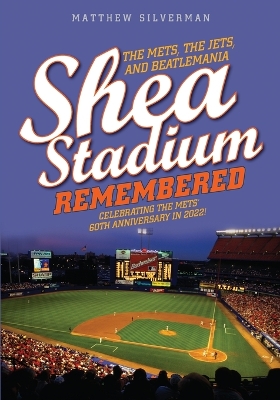 Shea Stadium Remembered: The Mets, the Jets, and Beatlemania

Description - Shea Stadium Remembered: The Mets, the Jets, and Beatlemania by Matthew Silverman

Few remember that Shea Stadium-and indeed the Mets baseball club itself-arose out of a dispute between two oversized egos: New York City official Robert Moses and Brooklyn Dodgers owner Walter O'Malley. While O'Malley wanted complete control over a new stadium and all of its concessions in Brooklyn, Moses insisted that the stadium be built by the city in Queens and leased to the Dodgers. The impasse led to the Dodgers following the Giants out to the West Coast, where The City of Los Angeles granted O'Malley all of the concessions he had sought in New York. With now no National League team in the New York area, the National League office awarded a new franchise to the city in 1960 on conditional that it fund and build a new stadium, which the Mets (and later the AFL Jets) would lease. The stadium was named in honor of William Shea, the person most responsible for returning National League baseball to New York.

Over its forty-four year existence Shea Stadium witnessed a colorful cavalcade of sporting and entertainment events, all detailed in this lively, skimable tribute to a memorable New York landmark.

It's all here: the memorable games; the unforgettable characters such as Tom Seaver, Joe "Willie" Namath, and Seinfeld buddy Keith Hernandez; and even the solemn moments such as when Shea was used as a staging area for first responders after 9/11. By the time of its demolition in 2008, the Mets had played more games at Shea than the Dodgers had ever played at Ebbets Field, and the stadium had hosted seven National League Championship Series, four World Series, three Jets playoff games, and the American Football League Championship game in 1968.

Other Editions - Shea Stadium Remembered: The Mets, the Jets, and Beatlemania by Matthew Silverman A Preview for this title is currently not available.
More Books By Matthew Silverman
View All

Baseball Miscellany: Everything You Ever Wanted to Know About Baseball
Matthew Silverman
Paperback , May '20
RRP: $33.69 $30.32