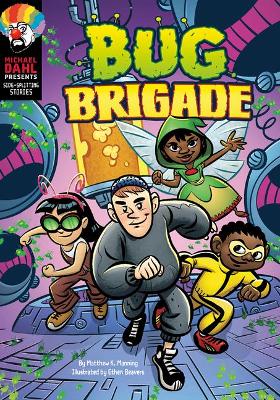 They're the world's greatest heroes The grim avengers of the night The planet's first line of defense against supervillains and alien threats They're . . . the Bug Brigade Doug Josie Kira and Reginald were all normal sixth graders at the start of their field trip to the Blue Mountain Science Museum. Proud members of the Bug Society of Littleton the friends are thrilled to explore a private wing of the museum where they can learn all about their favorite insects. But when they get mixed up in a scientist's experiment involving radioactive bugs they find themselves in over their heads and antennas. The Bug Brigade must swarm together to fight off an evil insect villain. Will their newfound buggy superpowers be up to the test