Sir John Soane's Influence on Architecture from 1791: A Continuing Legacy is the first in-depth study of this eighteenth-century British architect's impact on the work of others, extending globally and still indeed the case over 200 years later. Author Oliver Bradbury presents a compelling argument that the influence of Soane (1753-1837) has persevered through the centuries, rather than waning around the time of his death. Through examinations of internationally-renowned architects from Benjamin Henry Latrobe to Philip Johnson, as well as a number of not so well known Soanean disciples, Bradbury posits that Soane is perhaps second only to Palladio in terms of the longevity of his influence on architecture through the course of more than two centuries, from the early 1790s to today, concluding with the recent return to pure revivalism. Previous investigations have been limited to focusing on Soane's late-Georgian and then post-modern influence; this is the first in-depth study of his impact over the course of two centuries. Through this survey, Bradbury demonstrates that Soane's influence has been truly international in the pre-modern era, reaching throughout the British Isles and beyond to North America and even colonial Australia. Through his inclusion of select, detailed case studies, Bradbury contends that Soane's is a continuing, not negated, legacy in architecture. 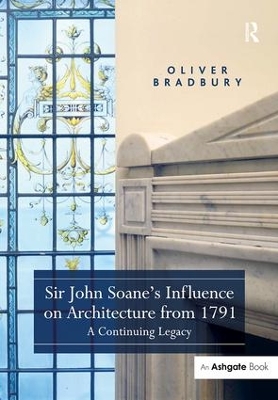 A Preview for this title is currently not available.
More Books By Oliver Bradbury
View All