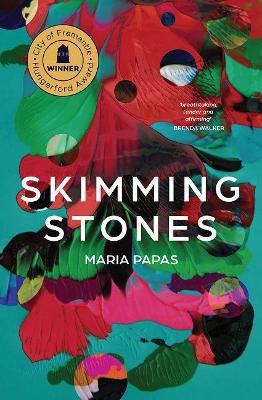 Winner of the 2020 City of Fremantle Hungerford Award, Skimming Stones is Maria Papas's debut novel about the lasting effects an illness can have on a family. It's a heartfelt story full of hope and courage.

Grace first met her lover, Nate, as a teenager, their bond forged in the corridors and waiting rooms where siblings of cancer patients sit on the sidelines.

Now an adult, for Grace, nursing is a comforting world of science and certainity. But the paediatric ward is also a place of miracles and heartbreak and, when faced with a dramatic emergency, Grace is confronted with memories of her sister's illness.

Heading south to Lake Clifton and the haunts of her childhood, Grace discovers that a stone cast across a lake sends out ripples long after the stone has gone.