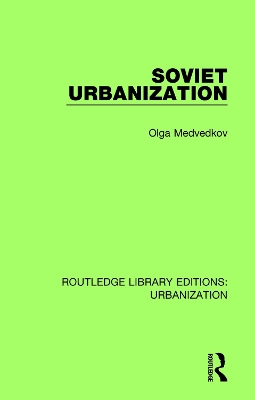 Originally published in 1990, Soviet Urbanization provides an assessment of Soviet urban systems. Drawing on her personal experiences at the Soviet Academy of Sciences and bringing with her much material otherwise unavailable in the West, the author analyses the structure of the Soviet urban network and its future development under the constraints of central planning. The author concludes that the danger to Soviet urbanization programme lies in the gap between central planning on the one hand and actual spatial change on the other. This book will appeal to students and academics working in the disciplines of geography, urban studies and planning. A Preview for this title is currently not available.
More Books By Olga Medvedkov
View All