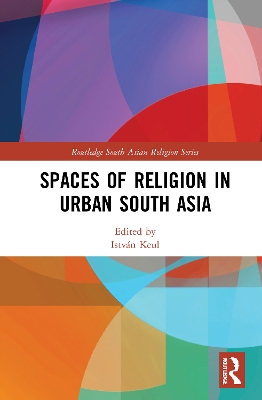 This book explores religion in various spatial constellations in South Asian cities, including religious centres such as Varanasi, Madurai and Nanded, and cities not readily associated with religion, such as Mumbai and Delhi.

Contributors from different disciplines discuss a large variety of urban spaces: physical and imagined, institutional and residential, built and landscaped, virtual and mediatised, historical and contemporary. In doing so, the book addresses a wide range of issues concerning the role of religion in the dynamic interplay of factors which characterise complex urban social spaces. Chapters incorporate varying degrees and forms of the religious/spiritual, ranging from invisible and incorporeal to material and explicit, embedded in and expressed as spatial politics, works of fiction, mission, pilgrimage, festivals and everyday life. Topics examined include conflictual situations involving places of worship in Delhi, inclusive religious practices in Kanpur, American Protestant mission in Madurai, the celebration of the Prophet's birthday in Lahore, gardens as imaginative spaces, the politics of religion in Varanasi and many others.

Illustrating and analysing ways and forms in which religion persists in South Asian urban contexts, this book will be of interest to researchers and students in the fields of cultural studies, the study of religions, urban studies and South Asian studies.

A Preview for this title is currently not available.
More Books By Istvan Keul
View All