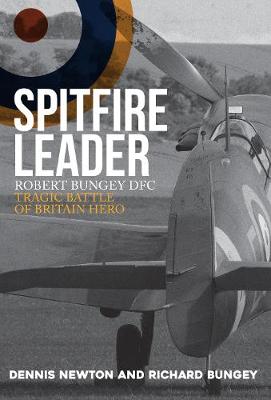 Bob Bungey's was an extraordinary and distinguished RAF career in World War Two. He joined survived both the Battle of France and the Battle of Britain where he joined Fighter Command (145 Squadron), flew Hurricanes, was shot down and almost killed, and converted to Spitfires early in 1941. Next he commanded the 452 Squadron of Spitfires, which became Fighter Command's most successful squadron three months running under his leadership, and sometimes led the famous Kenley Wing. He went on to command RAF Hawkinge in 1942, helping to develop the RAF air-sea rescue service; and was also involved in the planning stages for the Dieppe raid of August 1942. But after well over two years of almost non-stop, high-stress operational flying and `front line' service, he returned home to the RAAF in mid-1943. Privately, he had married Sybil, an English girl, and late in 1941(before Pearl Harbor) he sent her to his family in Australia to have their child in a supposed safer environment. Only six short weeks afterthey were reunited, Sybil fell ill and suddenly collapsed. She died in hospital. Nobody realised the depths of Bob Bungey's grief and stress until too late. He snapped. One day he walked out of his parents' house pushing his infant son, Richard, in his stroller and never returned. Bob was found the next day, shot in the head. But Bob's son, Richard, survived, and his life-long quest to uncover what happened to his father led, in 2010, to the Australian `60 Minutes' programme (Channel 9) producing a feature `The Battle Within'. Bob Bungey's story will appeal to aviation and military enthusiasts alike, and to those who love a remarkable story which is better than fiction.

A Preview for this title is currently not available.
More Books By Dennis Newton
View All