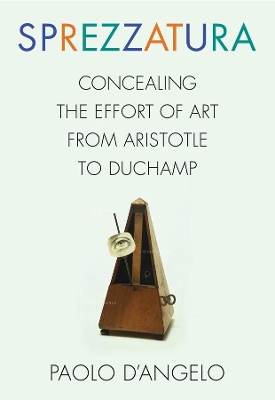 Sprezzatura: Concealing the Effort of Art from Aristotle to Duchamp

Description - Sprezzatura: Concealing the Effort of Art from Aristotle to Duchamp by Paolo D'Angelo

The essence of art is to conceal art. A dancer or musician does not only need to perform with ability. There should also be a lack of visible effort that gives an impression of naturalness. To disguise technique and feign ease is to heighten beauty. To express this notion, Italian has a word with no exact equivalent in other languages, sprezzatura: a kind of unaffectedness or nonchalance.

In this book, the first to consider sprezzatura in its own right, philosopher of art Paolo D'Angelo reconstructs the history of concealing art, from ancient rhetoric to our own times. The word sprezzatura was coined in 1528 by Baldassarre Castiglione in The Book of the Courtier to mean a kind of grace with a special essence: the ability to conceal art. But the idea reaches back to Aristotle and Cicero and forward to avant-garde works such as Duchamp's ready-mades, all of which share the suspicion of the overt display of skill. The precept that art must be hidden turns up in a number of fields, from cosmetics to interior design, politics to poetry, the English garden to shabby chic. Through exploring different articulations of this idea, D'Angelo shows the paradox of aesthetics: art hides that it is art, but in doing so it reveals itself to be art and becomes an assertion about art. When art is concealed, it appears as spontaneous as nature?yet, paradoxically, also reveals its indebtedness to technique. An erudite and surprising tour through aesthetics, philosophy, and art history, Sprezzatura presents a strikingly original argument with deceptive ease.

Buy Sprezzatura: Concealing the Effort of Art from Aristotle to Duchamp by Paolo D'Angelo from Australia's Online Independent Bookstore, BooksDirect.

A Preview for this title is currently not available.
More Books By Paolo D'Angelo
View All