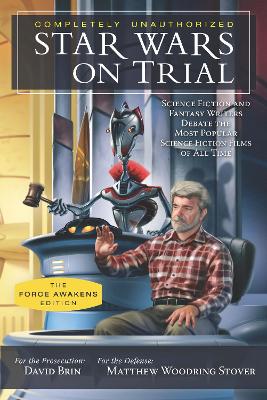 Order in the Court!
Star Wars: the most significant, powerful myth of the twenty-first century or morally bankrupt military fantasy?
Six films. Countless books. $20 billion in revenue. No one can question the financial value or cultural impact of the Star Wars film franchise. But has the impact been for the good?
In Star Wars on Trial's courtroom-Droid Judge presiding-Star Wars stands accused of elitist politics and sexism, religious and ethical lapses, the destruction of literary science fiction and science fiction film, and numerous plot holes and logical gaps.
Supported by a witness list of bestselling science fiction authors, David Brin (for the prosecution) and Matthew Woodring Stover (for the defense) debate these charges and more before delivering their closing statements.
The verdict? That's up to you.
The release of Star Wars: The Force Awakens is the perfect time to look back at George Lucas' crimes, and new forewords by Brin and Stover discuss the newest generation of Star Wars films and what JJ Abrams must do to live up to-or redeem-the franchise.

A Preview for this title is currently not available.
More Books By David Brin
View All