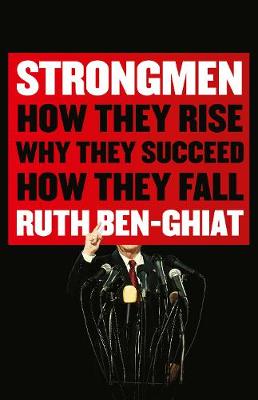 Strongmen: How They Rise, Why They Succeed, How They Fall

Description - Strongmen: How They Rise, Why They Succeed, How They Fall by Ruth Ben-Ghiat

'A gripping and illuminating picture of how strongmen have deployed violence, seduction, and corruption' Daniel Ziblatt, co-author of How Democracies Die

'A timely analysis of how a certain kind of charisma delivers political disaster' Timothy Snyder, author of On Tyranny

Today, countries from Russia to India, Turkey to America are ruled by men who combine populist appeal with authoritarian policies. These leaders have reshaped their countries around them, creating cults of personality which earn the loyalty of millions. And, as historian Ruth Ben-Ghiat shows, they do so by drawing on a playbook of behaviour established by figures such as Benito Mussolini, Muammar Gaddafi and Adolf Hitler.

So why - despite the evidence of history - do strongmen still hold such appeal for us? Ruth Ben-Ghiat reveals how, for a hundred years, charismatic leaders have emerged at moments of uncertainty and transition, manipulating electoral systems, brutally suppressing opposition, gaining control of the media and distorting the imaginations of the people they rule over in pursuit of absolute power.

Authoritarians hold their greatest appeal when society is polarised. Skilfully exposing both the power and the weakness of the strongman, this fierce and perceptive history is a vital step in understanding how to combat the forces which seek to derail democracy and seize our rights.

Buy Strongmen: How They Rise, Why They Succeed, How They Fall by Ruth Ben-Ghiat from Australia's Online Independent Bookstore, BooksDirect.

Other Editions - Strongmen: How They Rise, Why They Succeed, How They Fall by Ruth Ben-Ghiat