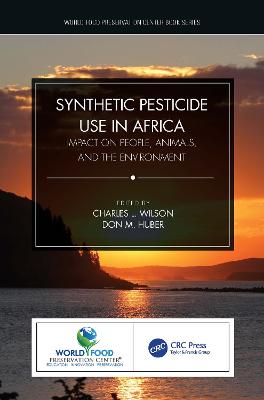 Synthetic Pesticide Use in Africa: Impact on People, Animals, and the Environment

Description - Synthetic Pesticide Use in Africa: Impact on People, Animals, and the Environment by Charles L. Wilson

A UN report presented to the UN Human Rights Council in 2017 recognized that, "although pesticide use has been correlated with a rise in food production, it has had catastrophic impacts" on human health and the environment. The report acknowledged that "increased food production has not succeeded in eliminating hunger worldwide because of the many interacting factors involved. Reliance on hazardous pesticides is a short-term solution that undermines the rights to adequate food and health for present and future generations."

It is hoped that the knowledge available in Synthetic Pesticide Use in Africa: Impact on People, Animals, and the Environment will both enlighten the reader to present serious concerns on the use of synthetic pesticides, and motivate society to make the changes necessary for the sustainable production of safe, nutritious, and affordable food for the anticipated 250 billion inhabitants of this Earth in 2050.

* Explains the relationship of synthetic pesticides to escalating noncommunicable human and animal diseases in Africa and developing countries.

* Discusses the impact of the herbicide glyphosate on the health of humans, animals, and the environment.

* Reviews the disease causing mode of action of glyphosate and other synthetic pesticides on nutrient density and human and animal bodies.

* Warns of the special vulnerability of children to synthetic pesticide toxicity.

Buy Synthetic Pesticide Use in Africa: Impact on People, Animals, and the Environment by Charles L. Wilson from Australia's Online Independent Bookstore, BooksDirect.

A Preview for this title is currently not available.
More Books By Charles L. Wilson
View All