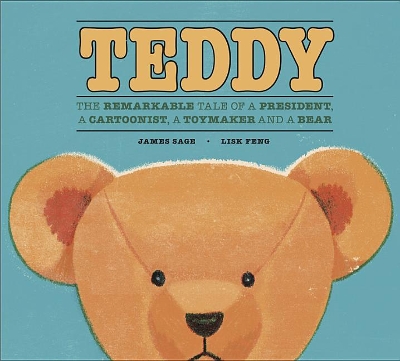 Teddy: The Remarkable Tale of a President, a Cartoonist, a Toymaker and a Bear

Description - Teddy: The Remarkable Tale of a President, a Cartoonist, a Toymaker and a Bear by James Sage

A delightful tale of the first-ever teddy bear. The story goes that on a hunting trip in 1902, President Theodore 'Teddy' Roosevelt refused to shoot a bear. 'Me' Shoot that little fella?' he said. 'Why, if I so much as ruffled his fur, I'd never be able to look my children in the eyes again!' When a political cartoonist shared the story in the newspaper, New York shopkeepers Rosie and Morris Michtom were impressed by the president's big, warm heart. So they decided to create a 'Teddy' bear in his honour to sell in their store. The bear was so popular, they made another one. And another. Before they knew it, they had to build a factory to accommodate the demand: it seemed every child wanted a teddy bear of their own! James Sage uses a playful blend of fact and fiction to tell this entertaining tale. The back matter includes a historical note, photos and a list of sources. The lively, fun narrative and vivid illustrations by Lisk Feng make for a wonderful read-aloud with universal appeal: adults will find it as charming as children do. The book has many applications in the social studies curriculum for the early grades, as the period and the president are brought vividly to life. The story also presents an inspiring small-business entrepreneurial success story. AGES: 4 to 7 AUTHOR: James Sage is the author of over a dozen books for children, including Old Misery, Stop Feedin' da Boids!, Fat Cat and Mr. Beast. James is an American who has lived and traveled in many parts of the world, and now lives in Lincolnshire in the UK. Lisk Feng is an award-winning illustrator of Everest and A Hug Is for Holding Me. Originally from China, she now works as a freelance illustrator in New York City.

Buy Teddy: The Remarkable Tale of a President, a Cartoonist, a Toymaker and a Bear by James Sage from Australia's Online Independent Bookstore, BooksDirect.

A Preview for this title is currently not available.
More Books By James Sage
View All