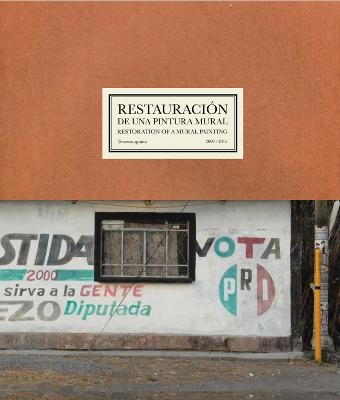 Restoration of a Mural Painting

Founded in Monterrey, Mexico, in 1998, Tercerunquinto is a collective made up of Julio Castro, Gabriel Cazares and Rolando Flores. The group has worked on projects intervening in both public and private spaces, questioning the limits between the two spheres, breaking down the elements these systems are composed of, and dismantling the logical order of their interrelations. The history of post-revolutionary political parties is told through the photographic archives of the group Tercerunquinto. This book analyses of the use of public murals as spaces for political party propaganda and the way in which murals become an economic opportunity for the inhabitants of Mexico's marginalised areas. Text in English and Spanish. AUTHOR: Taiyana Pimentel is the director of the Sala de Arte Publico Siqueiros in Mexico City. Sergio Raul Arroyo, with a PhD in art and anthropology, is an exhibition curator and art critic. Guillermo Fadanelli is a writer and the founder of Moho, a magazine and publishing firm. Claudio Hernandez directs the Restoration Laboratory at the MUAC in Mexico City. Itala Schmelz is the director of the Centro de la Imagen (Mexico City). Enrique Serrano Carreto is a physical anthropologist and researcher for the INAH (Mexico) who has had more than 30 scientific works and popular science books published. Jose Woldenberg is a professor at the UNAM School of Political and Social Sciences and a member of the National System of Researchers. 100 colour photos

A Preview for this title is currently not available.
More Books By Taiyana Pimentel
View All