"Extremely enjoyable, very funny and easy to read!" The Guardian

"The silliest, craziest most awesome stories ever" K-Zone

Andy and Terry's 13-storey treehouse is the most amazing treehouse in the world! It's got a bowling alley, a see-through swimming pool, a tank full of man-eating sharks, a giant catapult, a secret underground laboratory and a marshmallow machine that follows you around and shoots marshmallows into your mouth whenever you're hungry.

Well, what are you waiting for? Come on up!

Winner of YABBA Awards for Best Fiction for Older Readers 2011

Other Editions - The 13-Storey Treehouse by Andy Griffiths 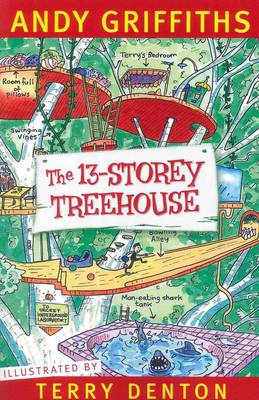 A Preview for this title is currently not available.
More Books By Andy Griffiths
View All