The Adventure Zone: Petals to the Metal

Description - The Adventure Zone: Petals to the Metal by Clint McElroy

With two dangerous magical artifacts already recovered, our heroes Taako, Magnus and Merle are feeling confident as they're sent out after their latest target: a notorious thief known as The Raven. She's gotten her hands on another Grand Relic, and she's using it to terrorize the city of Goldcliff with killer vines, poisonous thorns, and one tree monster named Trent.

The assignment takes some white-knuckle wild turns, and the boys soon find themselves entangled in the weeds of underground battle wagon racing, which is both fast and furious if you catch the drift. Allied with a Lieutenant Hurley, who knows an awful lot about illegal racing circuits for a cop, our heroes are gonna have to gear up and burn some fantasy rubber if they want to stop The Raven from destroying the city . . . and herself with it.

Other Editions - The Adventure Zone: Petals to the Metal by Clint McElroy 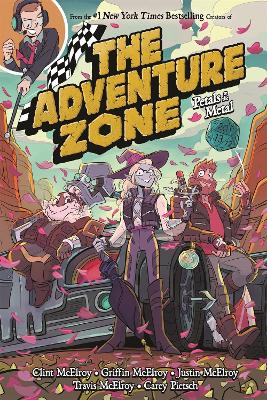 A Preview for this title is currently not available.
More Books By Clint McElroy
View All