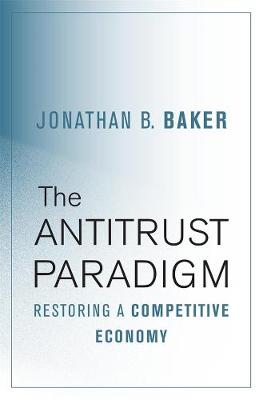 Description - The Antitrust Paradigm: Restoring a Competitive Economy by Jonathan B. Baker

A new and urgently needed guide to making the American economy more competitive at a time when tech giants have amassed vast market power.

The U.S. economy is growing less competitive. Large businesses increasingly profit by taking advantage of their customers and suppliers. These firms can also use sophisticated pricing algorithms and customer data to secure substantial and persistent advantages over smaller players. In our new Gilded Age, the likes of Google and Amazon fill the roles of Standard Oil and U.S. Steel.

Jonathan Baker shows how business practices harming competition manage to go unchecked. The law has fallen behind technology, but that is not the only problem. Inspired by Robert Bork, Richard Posner, and the "Chicago school," the Supreme Court has, since the Reagan years, steadily eroded the protections of antitrust. The Antitrust Paradigm demonstrates that Chicago-style reforms intended to unleash competitive enterprise have instead inflated market power, harming the welfare of workers and consumers, squelching innovation, and reducing overall economic growth. Baker identifies the errors in economic arguments for staying the course and advocates for a middle path between laissez-faire and forced deconcentration: the revival of pro-competitive economic regulation, of which antitrust has long been the backbone.

Drawing on the latest in empirical and theoretical economics to defend the benefits of antitrust, Baker shows how enforcement and jurisprudence can be updated for the high-tech economy. His prescription is straightforward. The sooner courts and the antitrust enforcement agencies stop listening to the Chicago school and start paying attention to modern economics, the sooner Americans will reap the benefits of competition.

A Preview for this title is currently not available.
More Books By Jonathan B. Baker
View All