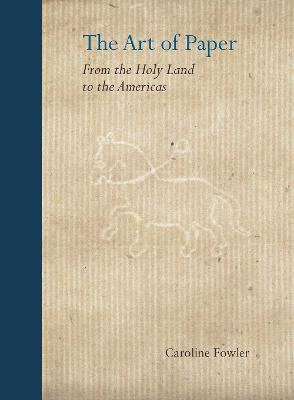 The Art of Paper: From the Holy Land to the Americas

Description - The Art of Paper: From the Holy Land to the Americas by Caroline Fowler

The untold story of how paper revolutionized art making during the Renaissance, exploring how it shaped broader concepts of authorship, memory, and the transmission of ideas over the course of three centuries

In the late medieval and Renaissance period, paper transformed society-not only through its role in the invention of print but also in the way it influenced artistic production. The Art of Paper tells the history of this medium in the context of the artist's workshop from the thirteenth century, when it was imported to Europe from Africa, to the sixteenth century, when European paper was exported to the colonies of New Spain. In this pathbreaking work, Caroline Fowler approaches the topic culturally rather than technically, deftly exploring the way paper shaped concepts of authorship, preservation, and the transmission of ideas during this period. This book both tells a transcultural history of paper from the Cairo Genizah to the Mesoamerican manuscript and examines how paper became "Europeanized" through the various mechanisms of the watermark, colonization, and the philosophy of John Locke. Ultimately, Fowler demonstrates how paper-as refuse and rags transformed into white surface-informed the works for which it was used, as well as artists' thinking more broadly, across the early modern world.


Buy The Art of Paper: From the Holy Land to the Americas by Caroline Fowler from Australia's Online Independent Bookstore, BooksDirect.

A Preview for this title is currently not available.
More Books By Caroline Fowler
View All