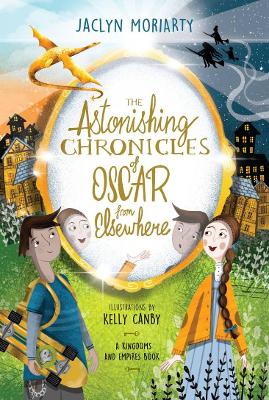 The Astonishing Chronicles of Oscar from Elsewhere

Description - The Astonishing Chronicles of Oscar from Elsewhere by Jaclyn Moriarty

Let me get this straight. I'm on a trip with the following people:
1) Bronte, a girl who makes magical 'Spellbinding' rings,
2) Alejandro, a former pirate/current prince who can shoot arrows and make fire from stones,
3) Imogen, who can read broken maps and is a kickboxing master,
4) Esther, who saved her entire world from some kind of ancient monster,
5) Astrid, a smart ten year old who can read minds, and
6) Gruffudd, a surprisingly speedy (and always hungry) Elf.

And who am I? Just a kid who skips school to ride a skateboard.

The Astonishing Chronicles of Oscar from Elsewhere is the account of Monday through Friday of last week. That's when Oscar found himself on a quest to locate nine separate pieces of a key, held by nine separate people, in order to unlock a gluggy silver spell that had trapped the Elven city of Dun-sorey-lo-vay-lo-hey. The quest was an urgent one. Friday at noon, the spell would become permanent, the Elves would be crushed to death and Oscar would be trapped in this magical world forever. (The account, it should be noted, has been written at the request of a small public school's Deputy Principal. She wants to know exactly what Oscar considered more important than coming to school last week.)

A Preview for this title is currently not available.
More Books By Jaclyn Moriarty
View All