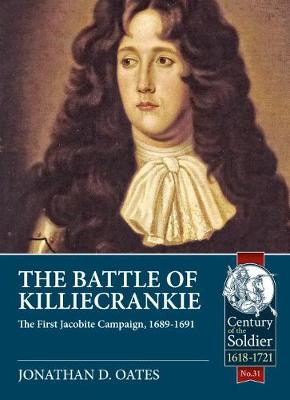 The Battle of Killiecrankie: The First Jacobite Campaign, 1689-1691

Description - The Battle of Killiecrankie: The First Jacobite Campaign, 1689-1691 by Jonathan D. Oates

An account of the military struggle in Scotland from 1689-1691, focussing on the men who fought and died in the battles of Killiecrankie, Dunkeld and Cromdale. In 1689 a bloody battle took place at Killiecrankie. This book covers the fighting as a blow by blow account, using archival, archaeological, literary and published accounts to do so. But the battle, though decisive, did not mark the end of the struggle, for in the next month a beleaguered Scottish battalion faced a far larger Scottish force further south at the little town of Dunkeld. Warfare continued in the next year, with one battle in the Highlands at dawn, and a number of skirmishes and minor sieges. AUTHOR: Dr Oates has been interested in the Jacobite period since his schooldays in the 1980s. His undergraduate dissertation and doctorate (Reading University, 1991 and 2001) focussed on the impact of the Jacobite threat in the north east of England in 1715 and 1745. He has had 31 books published, five of them on aspects of the Jacobite campaigns from 1715-1746, including studies of the battles of Sheriffmuir and Preston. 17 illustrations

A Preview for this title is currently not available.
More Books By Jonathan D. Oates
View All