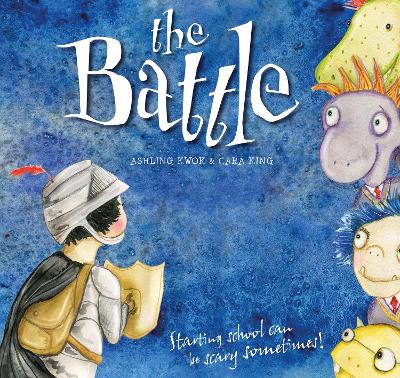 The Battle: Starting school can be scary sometimes!

Description - The Battle: Starting school can be scary sometimes! by Ashling Kwok

Find out what happens when you learn to let down your guard, be yourself, and open up to friendship in this encouraging tale about a boy and a school full of ogres and dragons.

It's Edward's first day of knight school and he's scared of what's to come. He puts on his armor and prepares for battle. After all, it's sure to be terrifying with all those creatures about. Sure enough, he spends all day surrounded by scary ogres and fearsome dragons. Then, one of them offers him some of her lunch!

With this gesture of friendship, Edward is inspired to take a chance and remove his armor. He soon realizes that maybe things aren't as bad as they first seemed and in fact, his armor was holding him back. As he learns to let his guard down, magic and fun await and Edward finds that the dragons and ogres he feared are actually just like him.

The Battle is a story that every child can relate to and teaches kids that perception and attitude are vitally important. If we let down our guard, put our fears aside, and allow ourselves to live in the moment, magic just might happen. Imaginative, bold and inspiring, this is the perfect companion for any child worried about starting school.

Other Editions - The Battle: Starting school can be scary sometimes! by Ashling Kwok