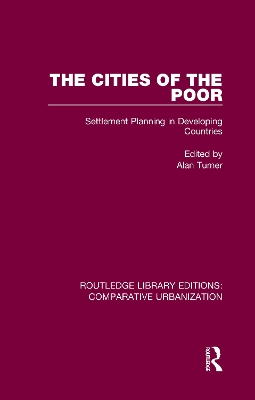 The Cities of the Poor: Settlement Planning in Developing Countries

Description - The Cities of the Poor: Settlement Planning in Developing Countries by Alan Turner

Originally published in 1980, this book was written by consultants in urban development with wide experience in the developing world and is a source book aimed at advisers (often from developed countries) who assist with urban planning matters on behalf of multi-lateral agencies such as the World Bank. It presents a style of consultancy which accepts that not all the problems of settlement planning in developing countries can be solved by the transfer of Western methods. Although the book concentrates on the techniques and methods which have been found to be effective in the field, it also argues for a new philosophy of consultancy, in which consultants work with local staff and using the ingenuity and spirit of enterprise among the communities themselves.

Buy The Cities of the Poor: Settlement Planning in Developing Countries by Alan Turner from Australia's Online Independent Bookstore, BooksDirect.

A Preview for this title is currently not available.
More Books By Alan Turner
View All