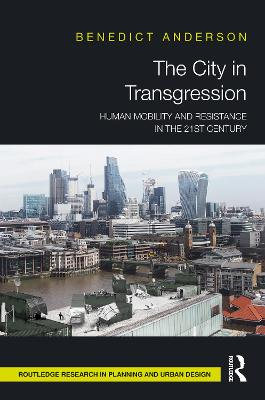 The City in Transgression: Human Mobility and Resistance in the 21st Century

Description - The City in Transgression: Human Mobility and Resistance in the 21st Century by Benedict Anderson

The City in Transgression explores the unacknowledged, neglected, and ill-defined spaces of the built environment and their transition into places of resistance and residence by refugees, asylum seekers, migrants, the homeless, and the disadvantaged.

The book draws on urban and spatial theory, socio-economic factors, public space, and architecture to offer an intimate look at how urban sites and infrastructure are transformed into spaces for occupation. Anderson proposes that the varied innovations and adaptations of urban spaces enacted by such marginalized figures - for whom there are no other options - herald a radical new spatial programming of cities. The book explores cities and sites such as Mexico City and London, the Mexican/US border, the Calais Jungle, and Palestinian camps in Beirut and utilizes concepts associated with 'mobility' - such as anarchy, vagrancy, and transgression - alongside photography, 3D modelling, and 2D imagery. From this constellation of materials and analysis, a radical spatial picture of the city in transgression emerges.

By focusing on the 'underside of urbanism', The City in Transgression reveals the potential for new spatial networks that can cultivate the potential for self-organization so as to counter the existing dominant urban models of capital and property and to confront some of the major issues facing cities amid an age of global human mobility.

This book is valuable reading for those interested in architectural theory, modern history, human geography and mobility, climate change, urban design, and transformation.

Buy The City in Transgression: Human Mobility and Resistance in the 21st Century by Benedict Anderson from Australia's Online Independent Bookstore, BooksDirect.

A Preview for this title is currently not available.
More Books By Benedict Anderson
View All