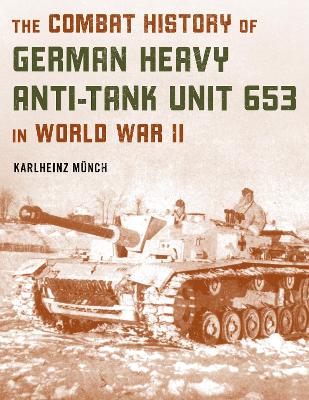 German Heavy Anti-Tank Unit 653 was equipped with the heaviest tank destroying vehicles of the German armed forces. Initially activated as an assault gun battalion and redesignated in April 1943, the 653 received its first Ferdinand heavy tank destroyers (later modified and renamed Elephants) in May 1943 and went into action on the Eastern Front a month later. In 1944, the unit converted to the even more massive Jagdtiger. The seventy-five-ton, heavily armored Jagdtiger was the behemoth of the battlefield and boasted a 128mm gun-as opposed to the Ferdinand's 88-with a range of more than thirteen miles, making it deadly despite its limited mobility. Outfitted with these lethal giants, the 653 saw service in Russia, Italy, Austria, and Germany.

The Combat History of German Heavy Anti-Tank Unit 653 in World War II includes hundreds of photos, many never published before, of Germany's rarely seen tank destroyers, including the Ferdinand, Elephant, and Jagdtiger. Color illustrations focus on unit markings, numbering, and camouflage, and the accompanying text chronicles the unit's combat operations as well as personal accounts from the men who rode in these mechanical monsters.

A Preview for this title is currently not available.
More Books By Karlheinz Munch
View All