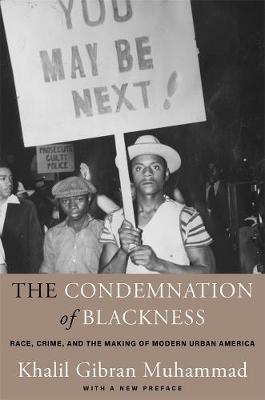 The Condemnation of Blackness: Race, Crime, and the Making of Modern Urban America, With a New Preface

Description - The Condemnation of Blackness: Race, Crime, and the Making of Modern Urban America, With a New Preface by Khalil Gibran Muhammad

"A brilliant work that tells us how directly the past has formed us."
-Darryl Pinckney, New York Review of Books

How did we come to think of race as synonymous with crime? A brilliant and deeply disturbing biography of the idea of black criminality in the making of modern urban America, The Condemnation of Blackness reveals the influence this pernicious myth, rooted in crime statistics, has had on our society and our sense of self. Black crime statistics have shaped debates about everything from public education to policing to presidential elections, fueling racism and justifying inequality. How was this statistical link between blackness and criminality initially forged? Why was the same link not made for whites? In the age of Black Lives Matter and Donald Trump, under the shadow of Ferguson and Baltimore, no questions could be more urgent.

"The role of social-science research in creating the myth of black criminality is the focus of this seminal work?[It] shows how progressive reformers, academics, and policy-makers subscribed to a 'statistical discourse' about black crime?one that shifted blame onto black people for their disproportionate incarceration and continues to sustain gross racial disparities in American law enforcement and criminal justice."
-Elizabeth Hinton, The Nation

"Muhammad identifies two different responses to crime among African-Americans in the post-Civil War years, both of which are still with us: in the South, there was vigilantism; in the North, there was an increased police presence. This was not the case when it came to white European-immigrant groups that were also being demonized for supposedly containing large criminal elements."
-New Yorker

Buy The Condemnation of Blackness: Race, Crime, and the Making of Modern Urban America, With a New Preface by Khalil Gibran Muhammad from Australia's Online Independent Bookstore, BooksDirect.

A Preview for this title is currently not available.
More Books By Khalil Gibran Muhammad
View All