The Consolations of History: Themes of Progress and Potential in Richard Wagner's Gotterdammerung

Description - The Consolations of History: Themes of Progress and Potential in Richard Wagner's Gotterdammerung by Alexander H. Shapiro

In this book on Richard Wagner's compelling but enigmatic masterpiece Goetterdammerung, the final opera of his monumental Ring tetralogy, Alexander H. Shapiro advances an ambitious new interpretation which uncovers intriguing new facets to the work's profound insights into the human condition. By taking a fresh look at the philosophical and historical influences on Wagner, and critically reevaluating the composer's intellectual worldview as revealed in his own prose works, letters, and diary entries, the book challenges a number of conventional views that continue to impede a clear understanding of this work's meaning. The book argues that Goetterdammerung, and hence the Ring as a whole, achieves coherence when interpreted in terms of contemporary nineteenth-century theories of progress, and, in particular, G.W.F. Hegel's philosophies of mind and history.

A central target of the book is the article of faith that has come to dominate Wagner scholarship over the years - that Wagner's encounter in 1854 with Arthur Schopenhauer's philosophy conclusively altered the final message of the Ring from one of historical optimism to existential pessimism. The author contends that Schopenhauer's uncompromising denigration of the will and denial of the possibility for human progress find no place in the written text of the Ring or in a plausible reading of the final musical setting. In its place, the author discovers in the famous Immolation Scene a celebration of mankind's inexhaustible capacity for self-improvement and progress. The author makes the further compelling case that this message of progress is communicated not through Siegfried, the traditional male hero of the drama, but through Brunnhilde, the warrior goddess who becomes a mortal woman. In her role as a battle-tested world-historical prophet she is the true revolutionary change agent of Wagner's opera who has the strength and vision to comprehend and thereby shape human history.

This highly lucid and accessible study is aimed not only at scholars and researchers in the fields of opera studies, music and philosophy, and music history, but also Wagner enthusiasts, and readers and students interested in the history and philosophy of the nineteenth century.

Other Editions - The Consolations of History: Themes of Progress and Potential in Richard Wagner's Gotterdammerung by Alexander H. Shapiro 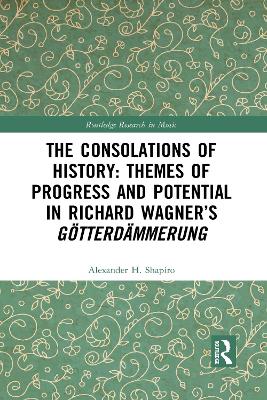 A Preview for this title is currently not available.
More Books By Alexander H. Shapiro
View All