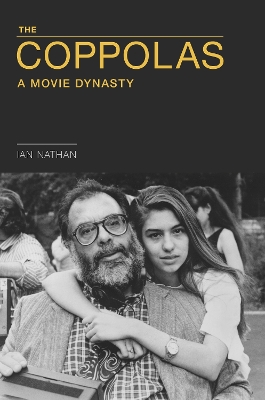 The Coppolas: A Movie Dynasty

Description - The Coppolas: A Movie Dynasty by Ian Nathan

This is a big story. The Coppolas are one of the great American filmmaking dynasties, a classic example of an immigrant family that has thrived in America - the parallels with the Corleones of The Godfather are there for all to see, albeit without the organised crime. Centred on two extraordinary filmmaking generations: father and daughter Francis Ford Coppola and Sofia Coppola, each in different ways has defined their times. And of course, their stories are intimately entwined. But the story will encompass so much more than the careers of two directors. There will be subplots extending out across the Coppola clan to include Nicolas Cage, Talia Shire, Roman Coppola, Jack Schwartzman and lesser-known scions like Marc and Christopher Coppola. It is also the case that the respective stories of Francis and Sofia offer a fascinating insight into the changing face of Hollywood and American culture from the seventies until now. It is also a book about America, a land of opportunity and the template on which the Coppolas can forge their art. Includes eight pages of colour photographs. AUTHOR: Ian Nathan, who lives and works in London, is one of the UK's best-known film writers. He is the author of eight previous books, including Alien Vault, the best-selling History of Ridley Scott's masterpiece, Stephen King at the Movies, Ridley Scott: A Retrospective, Terminator Vault, Tim Burton, The Coen Brothers, Anything You Can Imagine: Peter Jackson and the Making of Middle-earth and Inside the Magic: The Making of Fantastic Beasts and Where to Find Them. He is the former editor and executive editor of Empire magazine, and contributes regularly to newspapers, magazines and tv programs.

A Preview for this title is currently not available.
More Books By Ian Nathan
View All