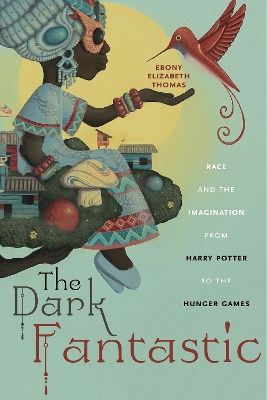 The Dark Fantastic: Race and the Imagination from Harry Potter to the Hunger Games

Description - The Dark Fantastic: Race and the Imagination from Harry Potter to the Hunger Games by Ebony Elizabeth Thomas

Finalist, Creative Nonfiction IGNYTE Award, given by FIYACON for BIPOC+ in Speculative Fiction

Reveals the diversity crisis in children's and young adult media as not only a lack of representation, but a lack of imagination
Stories provide portals into other worlds, both real and imagined. The promise of escape draws people from all backgrounds to speculative fiction, but when people of color seek passageways into the fantastic, the doors are often barred. This problem lies not only with children's publishing, but also with the television and film executives tasked with adapting these stories into a visual world. When characters of color do appear, they are often marginalized or subjected to violence, reinforcing for audiences that not all lives matter.
The Dark Fantastic is an engaging and provocative exploration of race in popular youth and young adult speculative fiction. Grounded in her experiences as YA novelist, fanfiction writer, and scholar of education, Thomas considers four black girl protagonists from some of the most popular stories of the early 21st century: Bonnie Bennett from the CW's The Vampire Diaries, Rue from Suzanne Collins's The Hunger Games, Gwen from the BBC's Merlin, and Angelina Johnson from J.K. Rowling's Harry Potter. Analyzing their narratives and audience reactions to them reveals how these characters mirror the violence against black and brown people in our own world.
In response, Thomas uncovers and builds upon a tradition of fantasy and radical imagination in Black feminism and Afrofuturism to reveal new possibilities. Through fanfiction and other modes of counter-storytelling, young people of color have reinvisioned fantastic worlds that reflect their own experiences, their own lives. As Thomas powerfully asserts, "we dark girls deserve more, because we are more."

Buy The Dark Fantastic: Race and the Imagination from Harry Potter to the Hunger Games by Ebony Elizabeth Thomas from Australia's Online Independent Bookstore, BooksDirect.

Other Editions - The Dark Fantastic: Race and the Imagination from Harry Potter to the Hunger Games by Ebony Elizabeth Thomas A Preview for this title is currently not available.
More Books By Ebony Elizabeth Thomas
View All

The Dark Fantastic: Race and the Imagination from Harry Potter to the Hunger Games
Ebony Elizabeth Thomas
Paperback , Sep '20
RRP: $33.99 $29.91