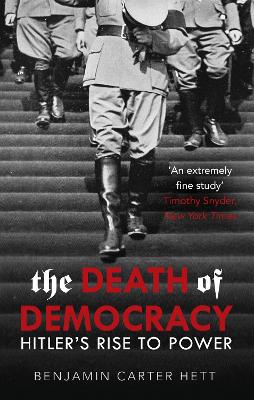 The Death of Democracy

Description - The Death of Democracy by Benjamin Carter Hett

A landmark account of the fall of the Weimar Republic and the rise of Hitler, based on award-winning research, and recently discovered archival material.

*A TIMES AND TELEGRAPH BOOK OF THE YEAR*

WHAT CAUSED THE FALL OF THE MOST PROGRESSIVE GOVERNMENT IN TWENTIETH-CENTURY EUROPE, AND THE RISE OF THE MOST TERRIFYING?

In the 1930s, Germany was at a turning point, with many looking to the Nazi phenomenon as part of widespread resentment towards cosmopolitan liberal democracy and capitalism. This was a global situation that pushed Germany to embrace authoritarianism, nationalism and economic self-sufficiency, kick-starting a revolution founded on new media technologies, and the formidable political and self-promotional skills of its leader.

Based on award-winning research and recently discovered archival material, The Death of Democracy is a panoramic new survey of one of the most important periods in modern history, and a book with a resounding message for the world today.

'Extremely fine... with careful prose and scholarship, he brings these events close to us.' Timothy Snyder, The New York Times

'With the injection of fresh contemporary voices, The Death of Democracy is also a thoughtful reflection of how our time more resembles the Thirties than the Noughties.' Daily Telegraph

Other Editions - The Death of Democracy by Benjamin Carter Hett 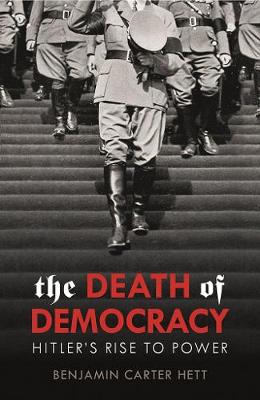 A Preview for this title is currently not available.
More Books By Benjamin Carter Hett
View All