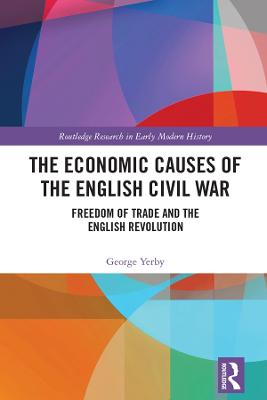 The Economic Causes of the English Civil War: Freedom of Trade and the English Revolution

Description - The Economic Causes of the English Civil War: Freedom of Trade and the English Revolution by George Yerby

This is a coordinated presentation of the economic basis of revolutionary change in 16th- and early-17th century England, addressing a crucial but neglected phase of historical development. It traces a transformation in the agrarian economy and substantiates the decisive scale on which this took place, showing how the new forms of occupation and practice on the land related to seminal changes in the general dynamics of commercial activity. An integrated, self-regulating national market generated new imperatives, particularly a demand for a right of freedom of trade from arbitrary exactions and restraints. This took political force through the special status that rights of consent had acquired in England, based on the rise of sovereign representative law following the Break with Rome. These associations were reflected in a distinctive merchant-gentry alliance, seeking to establish freedom of trade and representative control of public finance, through parliament. This produced a persistent challenge to royal prerogatives such as impositions from 1610 onwards. Parliamentary provision, especially legislation, came to be seen as essential to good government. These ambitions led to the first revolutionary measures of the Long Parliament in early 1641, establishing automatic parliaments and the normative force of freedom of trade.

Buy The Economic Causes of the English Civil War: Freedom of Trade and the English Revolution by George Yerby from Australia's Online Independent Bookstore, BooksDirect.

A Preview for this title is currently not available.
More Books By George Yerby
View All

The English Revolution and the Roots of Environmental Change: The Changing Concept of the Land in Early Modern England
George Yerby
Paperback , Mar '19
RRP: $81.99 $81.17