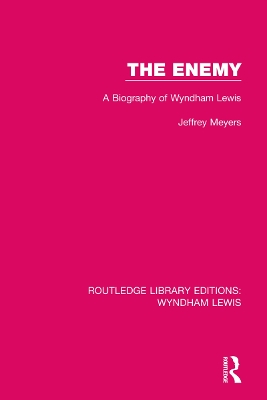 The Enemy: A Biography of Wyndham Lewis

Description - The Enemy: A Biography of Wyndham Lewis by Jeffrey Meyers

Originally published in 1980 and nominated for the Duff Cooper Prize, this was the first biography of Wyndham Lewis and was based on extensive archival research and interviews. It narrates Lewis' years at Rugby and the Slade, his bohemian life on the Continent, the creation of Vorticism and publication of Blast, and his experiences at Passchendaele, as well as his many love affairs, his bitter quarrels with Bloomsbury and the Sitwells, the suppressed books of the thirties, the evolution of his political ideas, his self-imposed exile in North America and creative resurgence during his final blindness. Jeffrey Meyers also describes Lewis' relationships with Roy Campbell, D. H. Lawrence, Katherine Mansfield, T. E Lawrence, Hemingway, Huxley, Yeats, Auden, Spender, Orwell and McLuhan. As the self-styled Enemy emerges from the shadows, he is seen as an independent and courageous artist and one of the most controversial and stimulating figures in modern English art and literature.

A Preview for this title is currently not available.
More Books By Jeffrey Meyers
View All