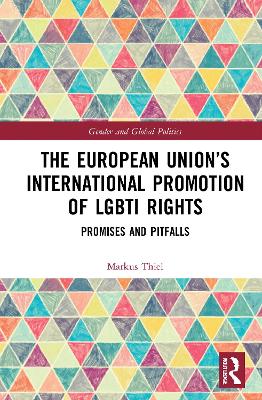 This book critically analyzes the European Union's promotion of LGBTI rights in the international arena. Lesbian, Gay, Bisexual, Transgender, and Intersex rights are heavily contested across the globe, with over 70 countries criminalizing same-sex relations and at least 10 imposing the death penalty.

The book details how the EU, based on different member state positions, attempts to jointly formulate and implement guidelines for the external promotion of LGBTI rights. It also problematizes the various normative and policy-based Eurocentric prescriptions to further these rights. Drawing on an international political sociology framework infused with queer theoretical thought, the author investigates the apparent normative tensions emerging from Europe's promotion of LGBTI rights as liberal human rights and the ensuing pushback by culturally and politically conservative states. He examines the compatibility of EU institutional and member states' conceptions of LGBTI rights and the more general question of the EU's normative agenda-setting power on the world stage. He then explores the external policy areas in which LGBTI rights promotion is formulated and diffused - namely in development and foreign aid, in enlargement and neighbourhood policies, and in other international organizations. In conclusion, the author suggests viewing the contention surrounding LGBTI rights within broader governance contexts, and thus reimagining rights promotion in a more holistic manner.

This book will be of great interest to students and scholars of LGBTI and Human Rights, European Politics, and International Relations.

A Preview for this title is currently not available.
More Books By Markus Thiel
View All